As of Dec. 15, the Trescott Water Supply Lands are open for public recreation. Please help keep this beautiful area open for all to enjoy, by observing simple rules that protect our community’s drinking water quality. MORE

When you shop at smile.amazon.com, we hope you’ll consider designating the Hanover Conservancy to receive a donation of 0.5% of your purchase – at no cost to you. ‘Tis the season!

2017 Winter Trips – our colorful trip card will arrive in current members’ mailboxes right after Christmas. Look for yours!

Hunting season is upon us, and it’s time to don a bit of blaze orange when you’re out in the woods – your pet, too.  Be safe out there – but don’t stop having fun outdoors!

Due to ongoing problems with recreation that compromise our public water supply, the Trescott Lands are closed for all purposes except hunting until further notice. 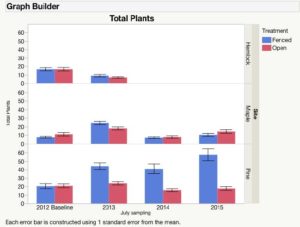 Safety orange is now in fashion for people and their pets until Dec. 15. The Balch Hill hunting policy (archery only) is posted here. General state rules apply at the Mayor-Niles Forest and at Greensboro Ridge (N of Silent Brook Trail only).

The NH Fish and Game Department is preparing its new ten-year plan for game management in our state. The Hanover Conservancy has submitted comment on the draft plan regarding its proposed management of deer and bear. Locally, the deer population has become a nuisance and a threat to forest health in the absence of effective predation. More flexible rules are needed to permit more response population management. The department also proposes to reduce the black bear population in our area by 28%, a figure that seems drastic. We support the department’s efforts to educate people to become more responsible neighbors to bears and to invest in habitat protection. Read the Conservancy statement.